The next generation of farm leaders were celebrated during a presentation ceremony held at Suffolk Rural, formerly Otley College, last week. The occasion saw 20 year old Olly Spiers crowned the Suffolk Agricultural Apprentice of the Year. This competition was first launched back in 2016 thanks to collaboration between Suffolk Rural, Fram Farmers and the Suffolk Agricultural Association, celebrating its fifth anniversary this year.

The idea is to help shine a light on the diverse careers that are possible within farming whilst also highlighting the importance of agricultural apprenticeships to young people. The winner - Olly – who works for the Spearhead Group and Deben Farms near Shottisham – had to submit a video to judges explaining his farming journey. The Cambridgeshire resident then secured the top prize after judges felt he was the best candidate after impressing them during an online interview. After winning the award, Tom – who lives in Badlingham, said: “I originally started A-levels and was all set for university. However, my dad fell ill so I decided to stay closer to home and study on an apprenticeship. 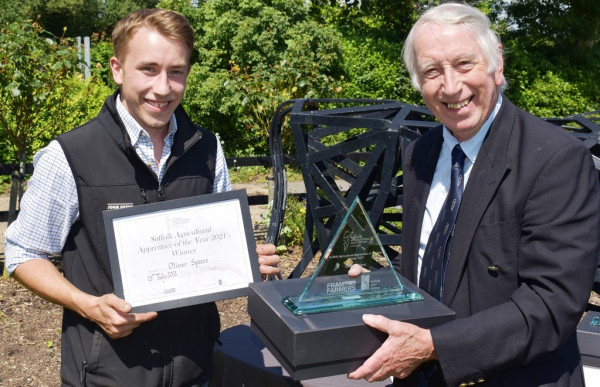 Olly Spiers with David Barker at the presentation ceremony.

“It’s really suited me and it’s a great way to learn on the job and get the skills I need. I’ve had great support from the college and although I was a bit surprised to win, I think the award will back up my ambitions to own a farm myself one day.”

The runner up of this year’s competition was 17 year old Tom Reily from Elmsett in Suffolk. Tom works for Marst Agri having originally been at Brad Farm Machinery in Hadleigh. The level three agricultural engineering apprentice said: “I chose to study on an apprenticeship as you get more hands on experience and this helps you get a full understanding of the industry you are working in. I’m pretty happy with myself to get this recognition – I think it will help me get my name about.” 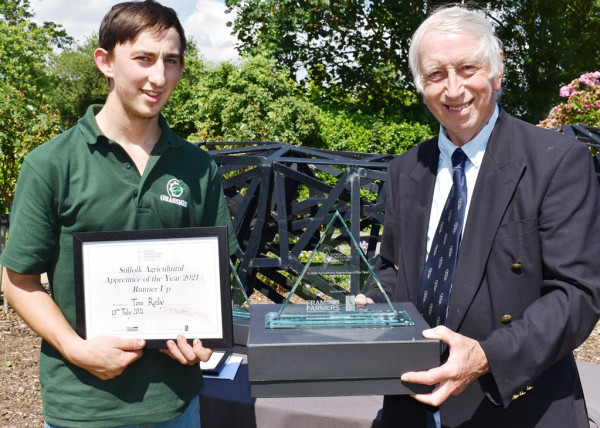 Tom Reily with David Barker. Tom was this year’s runner up of the competition.

Mark Butcher, an agricultural engineer at Marst Agri, said: “I’m really pleased for Tom.” Both prize winners received a trophy, certificate, free tickets to the Suffolk Show next year, some training vouchers from the college and some prize money.

The Chairman of the Suffolk Agricultural Association, Bill Baker, read out a citation at the awards handover. He said: “The competition was created to champion the young people who choose to work in our industry and showcase the excellent training opportunities that are available. The winners really stood out. It’s a no brainer for us to be involved.”

The current President of the Suffolk Agricultural Association – David Barker - then handed over the prizes. He said: “This competition helps demonstrate how highly skilled you need to be to work in farming. Winning this is a huge accolade for both students who will hopefully go on and become leading players in the farming world. It’s a real pleasure to bring education, industry and apprentices who are working in the county together and we look forward to being involved next year.”

Andrew Knowles is the CEO of Fram Farmers. They have supported the competition since its inception. Andrew said: “The sector is full of innovation and new technology and there are so many different aspects to agriculture. The competition helps celebrate the next generation of talent that will go on and become stewards of the countryside coming whilst also demonstrating that farming is a hi-tech leading edge sector. That is why we are so proud to be involved in this. Olly and Tom were two very different characters whose passion, enthusiasm and entrepreneurship shone through.”

Principal of Suffolk Rural, Viv Gillespie, said, “As a college we need to do all we can to promote and celebrate agriculture. We are so grateful to Fram Farmers and the Suffolk Agricultural Association for their support. The standard of entrants seems to improve year on year and Olly and Tom are worthy winners. Congratulations to them and a big thank you to Nicky Currie who helped set up and create this fantastic competition.” 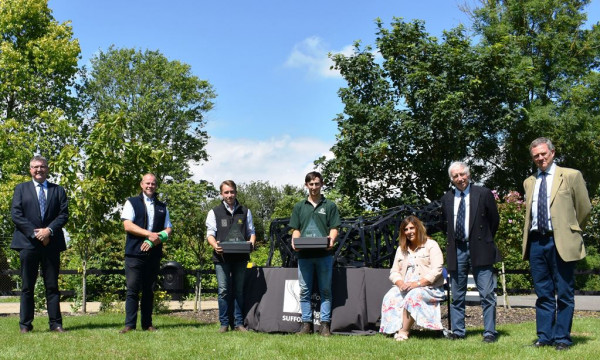 The search for the 2022 Suffolk Agricultural Apprentice of the Year will be launched towards the end of the year.

The UK's first commercially available robotic tractor has arrived on a Suffolk farm.

What’s Next For Farming?

As we started 2020, I doubt many of us had heard the expression ‘new normal’, and yet for the past 6 months that is exactly what we at Fram, our members and the wider farming community have been wrestling with.